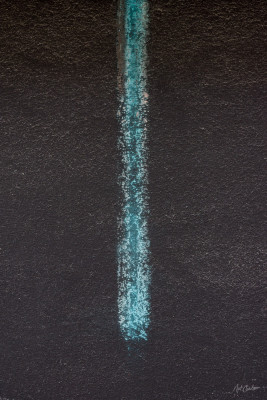 This is the kind of photograph I am always looking for. Simple, graphic, enigmatic.

I’ve titled this image ‘Gaelbreton Beam’ because, to me, it portrays a bridge and a beacon in the gap between the ancient peoples of Europe. (Weird, I know.)

The Gaels descended from the Celts and became what are considered the native inhabitants of the British Isles. The Bretons come from essentially the same genetic lineage, but became the people of Brittany, and eventually, modern France.

Throughout millennia, the people of England and France have been tied together by blood, marriage and historic events. Only the English Channel—a shallow stretch of water only about 20 miles wide—separates these kindred people. But so much has divided them.

This abstract photograph was made in Paris, France and presents a minimalist composition featuring a multi-hued teal blue strip dropping down into a deep black background.

Fine art prints available on any material, in any size. Also available as mixed media original on canvas with hand embellished acrylic.

Nat's book "Astratto Uno" features over 150 abstract photographs made over a period of nine years. You can get it in printed format or as a downloadable PDF.
Get the details >

“I’m a believer that there is great beauty in simplicity. Nat Coalson’s abstract photography and art are great examples of such beauty. With sharp tones and colours, Nat Coalson’s art adds that finishing touch to any room. Large or small, his pieces are compelling and calming at the same time.” –Diane Paz, 1point0 Design, Toronto, Canada