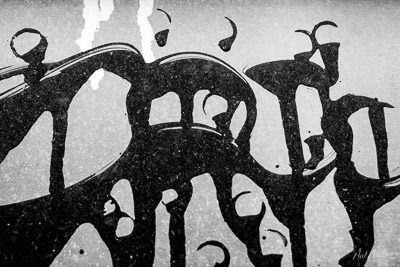 On my first trip to Bologna, Italy, I discovered a large trash bin with some curious paint markings on its lid. I stopped and took many photographs of the scene.

I’ve looked at these images for a long while and still am not sure what’s made these markings. But I don’t think they are intentional. At some point in the past, this metal surface came into contact with some black paint and the result is what you see here.

I have a strong philosophy that my photography—especially my abstract work—does not depict the visual works created by other artists. I don’t [generally] photograph graffiti, sculptures, even architecture that was meant as an aesthetic, visual statement made by another creator.

I believe the best fine art photography presents situations, subjects, concepts and ideas that were not thought of by someone else beforehand. As such, all my abstract works that I present publicly are of subjects and situations that I believe were not created for visual effect by another artist before I encountered it.

Which brings me back to the enigma of this image. I found it as you see it. But it perplexes me. What made these marks?

After much study I believe the shapes in the paint were not created intentionally, but from some activity which we will never know. If this is truly the case, this is one of the finest examples of “accidental design” that I’ve encountered.

Either way, I love it … and hope you will, too.

Nat's book "Astratto Uno" features over 150 abstract photographs made over a period of nine years. You can get it in printed format or as a downloadable PDF.
Get the details >